Imagine paying an extra $4K per month for your mortgage 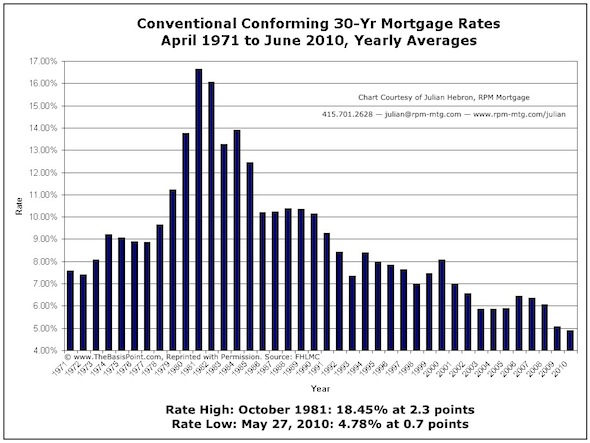 It sounds crazy that anyone would have had to pay such an exorbitant rate on a 30-year conforming loan. But guess what? It’s happened before. In October 1981, 30-year fixed rates on conforming loans peaked at 18.45 percent. See the graph below.

Thankfully, we’re nowhere near that 1981 high.

Bankrate.com’s latest report shows that the average 30-year-fixed-rate mortgage is 4.88 percent—“the lowest in the nearly 25-year history of the weekly Bankrate survey.” The average 30-year fixed rate on jumbo loans recently fell 2 basis points to 5.7 percent and is at its lowest level since March 2004, according to Bankrate.com.

A quick look at the chart shows that 30-year-fixed mortgage rates for conforming loans have been 7 percent or less since 2001.

The net effect? Many people who’ve entered the real estate market in the past 10 years were kids during the late 1970s to mid 1980s, when rates were sky high. They’ve always had access to low, or at least relatively low, mortgage rates.

We’re in a bubble

But historically, it’s clear we’re living in a bit of a bubble these days, in terms of low mortgage rates. They will rise again, though it’s impossible to predict exactly when and by how much.

So what should you do about it? It’s never a good idea to buy a home to live in just because rates are low, of course. Still, if you’re at all inclined to invest in a first home or to move up, this is an excellent time to make your move.

At a minimum, stay informed about mortgage rates—even if you’re a homeowner with no intentions of moving (because you might want to refi). Sign up for free mortgage rate alerts from Bank.com, Zillow, or Quicken Loans. Sites like Mortgage News Daily offer a ton of useful information, too.

And above all, don’t take low mortgage rates for granted. What goes down will surely go back up. And when you’re buying a home in an expensive market like San Francisco or New York, even a fractional rise in mortgage rates can transform the home you love from doable to out of reach.