How Google can add to your home’s value 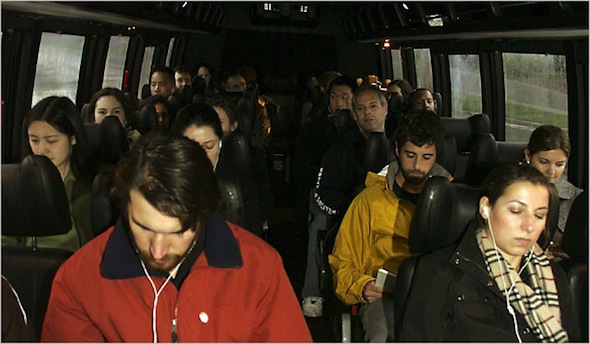 There’s a ‘light-filled’ 1894 Victorian house for sale in San Francisco’s Bernal Heights neighborhood. Among the advertised amenities: Two bedrooms, a library/media room with fireplace—and proximity to the Google shuttle.

You’ve probably seen the shuttles roaming the streets of Dolores Heights, Noe Valley, Bernal Heights, and the Valencia Corridor in San Francisco. In the morning, the buses shuttle Google employees down to the Googleplex in Mountain View and return them to SF in the evening.

Google isn’t the only Silicon Valley company offering employee shuttles in San Francisco, by the way. Others include Apple, eBay, and Genentech.

Many Googlers love the shuttles. By not driving to the Googleplex, employees have a ‘green’ and less stressful way to get to work. And the shuttles are equipped with Wi-Fi, so employees can work on their laptops or iPads during their commute. (The image at right is from The New York Times.)

But these corporate shuttles offer other benefits—to home sellers, buyers, and to the city of San Francisco.

* The shuttles are good for sellers. It’s hard to say how much the proximity to these shuttles might add to a home’s purchase price. But think about it: Plenty of people who work for Google and other tech companies make good salaries (even in this economy). So it’s logical that a home near a Google shuttle stop would be more attractive to them (and perhaps get a better price) than a comparable home that’s not near a stop.

* The shuttles are good for buyers. Many tech executives are young and want to live in San Francisco, as opposed to the quieter cities on the peninsula. But they don’t like the idea of spending 45 minutes to an hour in their car, driving to or from work. The shuttles make it way easier for tech workers to live where they want without the grinding commute. They’re getting the best of both worlds: the fun of living in San Francisco plus the great jobs in Silicon Valley.

Plus, neighborhood businesses stand to get a boost, too, from young residents with good incomes.

Not everyone loves the shuttles, of course. Some complain that the buses are too loud, and they’re too big for some of the streets they travel.

And yet, there’s no doubt that the corporate shuttles are helping to infuse new blood—and money—into San Francisco. In particular, the Mission has been enjoying a renaissance of sorts, with lots of young Google and other Silicon Valley employees moving in. They love the Mission’s vibe–the bars, the cafes, the restaurants, and the kind of street scene that’s best described as ‘only in San Francisco.’