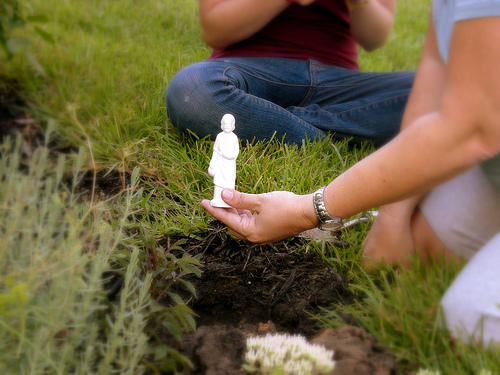 Don’t look now, but St. Joseph might be buried in your backyard.

Not the saint, of course, but a statue of him. Through the years, St. Joseph has become the patron saint of real estate. People across the country, if not the globe, often bury a small St. Joseph statue in the yards of properties they hope to sell.

Many believe the statue will bring them good luck in selling the home. When real estate agents have listings that won’t sell, they may stage some of the rooms, take new photos for the marketing materials, get the seller to move out or remove items from the home and put them in storage. And of course, they may reduce the price. If all else fails, many agents turn to St. Joseph.

Origins of the tradition

While the tradition may sound campy, if not irreverent, it has plenty of followers. Many agents bury a statue of St. Joseph as soon as the “For Sale” sign goes up on the front lawn. There have been stories of homes sitting for months without an offer. And then, after St. Joseph is buried on the property, the offers come in.

Where to bury the statue

However the tradition began, something else about it is unclear: Exactly how and where should St. Joseph be buried? Some believe the statue should be deep-sixed head down, facing the street. Others say St. Joseph should be buried facing the house. And those without a yard simply plant the saint in a flowerpot.

This much is certain: When the real estate market declines, sales of St. Joseph statues increase. “In the past, we’ve seen some upticks in sales of the kits whenever there’s a sign that the housing market is on the skids,” said Nicholas Cole, director of marketing for a Charlotte, NC company that sells religious items online. Cole was quoted by The New York Times in 2009 — during a particularly low point of the real estate market.

Are you a St. Joseph statue believer now? If so, head over to Amazon.com, where you can buy a St. Joseph Home Seller Statue Kit for $8. Shovel not included.

2 responses to Can’t Sell Your Home? Bury a Saint